Do you find lint and pills on your clothing when you pull them out of the washer? If you do, read on to learn how to treat these problems. 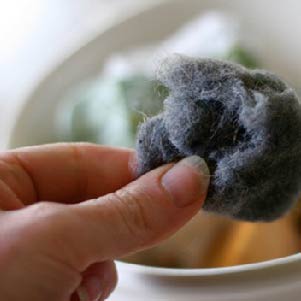 Before you wash, you need to look to see if your loads have “Lint Producers”. Lint Producers are types of clothing that create lint that sticks to the rest of your laundry. The culprits of producing lint are fleece sweat suits, chenille items, new terry cloth towels, and flannel pajamas. Then look for “Lint Attractors”. Lint Attractors attracts lint and can make it get all over your other clothes. These include corduroys, synthetic blends, and dark fabric. To prevent lint, sort Lint Attractors from Lint Producers and wash them separately.

Also check to make sure pockets are empty of tissues and other paper before you wash. And make sure to empty the washer and dryer lint filters before and after each load.

Now if you already have a load covered in lint, then simply use a lint roller or pat with the sticky side of masking or packing tape to lift the lint from your clothing.

Pills are small balls of fiber that form on a piece of cloth. It is caused by abrasion of fibers, and is most common among synthetic fabrics.

If you already have pills on your clothing,

With these simple solutions, you should be able to avoid most problems with laundry lint and pills. Bear in mind that you can save yourself a lot of time for more worthwhile activities by delegating your laundry to Utopia Cleaners.  Try out laundry delivery service in Brookline, Cambridge, Boston, Winchester, Wellesley, Newton, Woburn, Arlington and nearby areas.